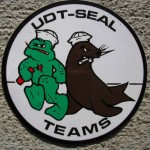 Coastal River Division 21 had a small SEAL detachment assigned to our Operations Department during its years at Great Lakes. Led by LT “Lee” and 4 – 5 senior enlisted SEALS, all recently back from the Teams in Vietnam.  Mike, Bob, Lenny, David…  LT “Lee” was an Mustang SEAL Officer, formerly an enlisted SEAL. A more solid, experienced  guy you will never encounter.

His team of equally solid guys occasionally filled billets on the PTF’s when we were shorthanded, notably as weapons trainers or gun crews.  As with all SEALS in those days, they carried a variety of Navy ratings but at the heart, they were SEALS.  This outfit at Great Lakes must have been a strange environment for them as they, and most of the crews transitioned to a peacetime training environment.

The NAVBASE had rules about uniforms that unfortunately applied to CRD21 as well. The enlisted wore dungarees and the officers and chiefs wore khaki’s, not the green utilities worn by the rest of the Navy’s CRD units. That also applied to the SEALS who much preferred their UDT shorts, blue & golds and boots.

A source of much grumbling but as they told me: “You wear-a the name, you play-a the game”. Incidentally, if you see any photo’s of PTF’s with the crew in Greens, it was not CRD21, if they were in dungarees, they most likely were CRD21.

Our SEALS’ principal involvement was to train, assist and advise us on the CRD and PTF’s primary function of transporting, inserting, supporting and extracting SEALS on any number of types of missions. I won’t say much about this except to say it was done mostly at night, hence few photo’s.

Those evolutions were often to move into a target area, launch them in their IBS (Inflatable Boat Small – Navy lingo) and then stand by to support them with gunfire if necessary. Then move in, pick them up, leave rapidly and discourage anyone from following us.

Here’s a photo of the IBS with its small outboard motor which was used in situations where the PTF didn’t get too close inshore for a variety of reasons. These boats were ideally suited for the SEALS missions.  Normally crewed by 3 men paddling on each side plus a coxswain in the rear.  Hence the origin of a 7 man SEAL squad.

Here’s a shot of the crew training for a night IBS launch. The lifelines and stanchions were dropped and the boat readied for launch. Seems simple enough on a calm day but required good crew coordination at night.  Authors Photo:

Launching an IBS from PTF-17

One notable evolution, not involving the PTF’s was a SEAL training Op on the Mississippi River, nominally as an informal SERE (Survival, Evasion, Resistance, Escape) exercise. I got to go along as a “trainee/observer” which I thought was great fun and a greater experience (we didn’t do the “resistance” part).

The “mission” was to infiltrate the AO, capture some enemy canoes at a location on the Turkey River in Iowa, paddle downstream out into the Mississippi and then go upstream for about 10 miles to Lock and Dam # 10 to simulate sabotaging it.

We were only allowed to carry a jungle hammock (luxury item for peacetime training!), knife, fish hooks and line, “living off the land”.  No cameras allowed, no photo’s. We hid out on islands and along the banks of the river by day “scavenging” for food.

This was Iowa farm country….Corn on the cob, potatoes, apples, watercress, creek chubs, blue berries, strawberries, catfish, an unfortunate rattle snake (they DO taste like chicken) and even some watermelon left by boaters. We built an in-ground meat/fish smoker to preserve the meat for storage and transport – worked great. Lee knew the territory and what to eat, I gained 5 pounds during the 14 day “survival” trip…

We also learned to “cut enemy lines of communications”, capture vital enemy communications equipment and generally doing what SEALS did. It ended with some rappelling training (I watched) on some big cliffs along the Mississippi. (Hint: Don’t rappell while wearing a Woolly-Pully”.) Then off to the “Cave” safe house to meet the local partisans and debrief. If you were there, you know what all of this actually means…..  Good training, good fun.

To maintain their “Jump, Dive and Demo” proficiency pay they came up with many novel training evolutions.  In the diving arena they would infiltrate into the local golf course at night (dead of winter-no one around), cut a hole in the ice over the various water hazards and scuba dive for the treasure trove of golf balls therein.

They would also go out to Fox Lake in northern Illinios, the scene of winter-time motorcycle and snow mobile races on the (more-or-less) frozen lake.  They retrieved many snowmobiles or dirt bikes that managed to submerge after penetrating the ice.  They would also dive along the many fishing piers along the lake shore at night, pulling buckets full of fishing lures that had gotten snagged on the pilings.  Good practice for planting Limpet mines on that enemy warship.

The Command also sent them to Outboard Motor School in Waukegan (home of Johnson/Evinrude Outboards), off to lock picking school, diesel locomotive (sabotage) school with the Illinois Railroad and other interesting locales.  They also did parachute jumps and demolition refresher training with an Army Special Forces unit based at Fort Sheridan, near Chicago.

One of our SEALS, Petty Officer “Lenny”, would often lay down on a quay wall with his arm submerged in the water – for an hour or more at times.  Then – whoosh!  Out would come a big Coho salmon he caught by the gills with his bare hand….I tried it – just ended up with wrinkled fingers….”you had to communicate with the fish’s environment and gain his confidence properly…”

It turns out that this manner of fishing had many lessons. The Objective was simple: Grilled salmon for dinner. For a successful tactical mission you had to get inside the fish’s OODA Loop (Observe, Orient, Decide, Act). You would use all the military arts of observation, recon, stealth, patience, timing, surprise and quick action to accomplish the mission “at hand”, and do it faster than the target could get inside YOUR OODA Loop. Another day in the life of Freddie the Frogman…and a young Ensign.

One day, the Naval Training Center commander asked CRD21 to put on a “combat display”, probably for Family Day or other open house on the base.  So we concocted a mission along the waterfront where the RV park is currently located – in those days it was open beach / scrub.  NTC had set up some bleachers along the coastal road so visitors could watch.

The idea of this simulated night Op was a PTF would sneak in, heave to and launch the SEALS in the IBS who then paddled ashore.  There they planted some demolition on the “target” (an enemy missile launcher as I recall) and then withdrew.  Somehow the enemy found out before they blew the demo (half pound blocks of Composition B explosives)  so the PTF had to return fire as the SEALS paddled back out to the boat.

As part of the preparations for the “demo” (ahem), they planted many small blocks of Comp B around the beach to simulate our incoming mortar and 40 mm gunfire.  Cool.

So then they blew the main demo charge (electrically fired by a SEAL actually on the beach with the safety officer) and BOOM!  big explosion throwing up lots of sand then lots of smaller explosions simulating our mortar fire.   BOOM  BOOM  BABOOM BABOOM etc.  Lots of dust and flying shrubbery.   We were firing the .50 cal machine gun with blanks.  Enemy missile launcher destroyed,  all hands recovered, PTF roars off, the crowd cheered.

Fun Fact: Later,  we got the “bill” for all the broken windows in the Fire Controlman Training Building up on top of the bluff.  OOPS!  Amazing what the shock wave caused by a few pounds of explosives can do, even at a distance.

If you read GMCM Bob Stoner’s account of life at CRD21 (highly recommended) he will tell of a certain Gunners Mate who incorrectly installed the Blank Firing Adapter on our .50 Cal machine gun.  Modified of course with the air-cooled aircraft barrels required for blank firing of an M2 .50 Cal. back in those days.

That BFA probably went sailing over the spectators heads, no one was the wiser except the .50 gunner who now had an unexplained stoppage.   It’s probably still buried in the bluff below FT “A” School.  Another day at the office….

These guys were the “Old Navy” SEALS when the Teams were much smaller and tighter as compared with today’s large NSW community, so I’m told.  They had done everything imaginable during the war, didn’t talk about it much but you knew they knew their business. I learned a lot from all of them and Lt “Lee” was a great mentor of mine.

For more information about CRD-21, PTF boats in general and PTF-17 in particular, take a look here: PTF-17

Or this one regarding PTF weapons systems: PTF-17 Weapons Systems