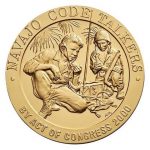 We put together a display highlighting the Navajo Code Talkers (NCT) for the Veterans Day event at the Veterans Memorial Building of San Ramon Valley (CA), November 11, 2021. We had several hundred visitors over this 4 day special event whose overall theme was recognition of the 75th anniversary of the end of WWII in 2020.

Members of 14 different Native American tribes participated as “code talkers” during WWII, the Navajos are perhaps the most recognized. Above: It appears they were not very impressed with the 1930’s tech TBY radio in a wet jungle. Understandable!

The wartime service of these guys has my total respect – on many levels.

The display included posters of iconic photos of the US Marine Corps NCT’s taken in the Pacific as well as the Comanche code talker assigned to the US Army’s 4th Signal Company, 4th Infantry Division in Normandy 1944.

Posters included the above cover of the Dictionary that the Navajo’s developed. It was used to standardize their substitutes for English letters and the code words for 800 items of military significance that they had to memorize. Note the DOD Declassified stamp on the Dictionary cover (1968). Source: Naval History and Heritage Command. (Reference 104).

Example: The code word for a fighter plane was Hummingbird. The Navajo word for Hummingbird is spoken Da-he-tih-hi. Since Navajo is a spoken language and had never been put into writing; it was quite secure for the purpose. At the time, it was determined that only 30 non-Navajo’s could speak the language; they were mostly missionaries from the US Southwest and none had any “Axis” connections.

This verbal communication bypassed the otherwise lengthy process of encrypting and decrypting each letter of a message via the M-209 Converter (below). The M-209 was normally used for ongoing but otherwise time-perishable tactical comms absent the code talkers.

Equipment we displayed included the TBX-2 and TBY-2 as seen in those iconic Pacific theater photos as well as a functioning SCR-284 as seen in the Normandy photo. Included were other items they used including a BC-611 Handy Talkie, EE-8 field telephones and other period infantry equipment including an M-1 Carbine and field/web gear.

I also ran a 3 minute loop of Marine Corps veteran and NCT Peter MacDonald Sr. describing NCT operations on Iwo Jima and an actual coded message that was sent, decoded and acted upon. https://www.youtube.com/watch?v=QmiqnAQTTCI

I also displayed an operational RT-68 transceiver and a PRC-6 handy talkie running on 51.0 mc to demonstrate their use during the Korean War. Native American code talkers also served in that war (as well as WWI) although the extent of their operations in those conflicts is not well documented. The kids enjoyed trying out the PRC-6 and hearing themselves on the RT-68 speaker. (I ID’d as N6CC periodically…)

Above: The overall view of this indoor display with posters. Period table cloths, some bamboo poles, the smell of dank camo net and warm MFP vapors. You remember… The GN-45 hand generator to power the SCR-284/PE-104 sat on the grass floor mat.

Here is a closer view of the above. The Mess Kit and Canteen Cup were even demonstrated at a nice Pancake Breakfast provided by the Town Council members for the Veterans .

Below is the TBX-2 and TBY-2 static display along with photos of each of them being used. The display included the monitor for the NCT video loop. (Thanks to Tom for the loan of the TBX and to Lee for the Carbine, I couldn’t come up with a .45 cal Reising SMG as seen in the upper photo..)

Below is a close up of the SCR-284 and RT-68 with ersatz antenna mount setup: Improvise, Adapt, Overcome….

As part of the SCR-284 setup, I included the Normandy photo showing the SCR-284 in action from a shell hole. The Comanche code talker (on the right in the photo) is seen using the BC-611 along with the 4th SigCo team.

To illustrate a typical function of a team like this I included a description of how this team could take a call (in code) from a local tactical unit “in contact”. They might request supporting fires and then the team passes it on to DivArty or a Naval Gunfire ship out in the channel or off the coast.

A reasonable facsimile of the English Channel was provided, including a floating model Battleship steaming within 14″ and 5″ gun range. Here the USS Missouri representing the USS Nevada at Normandy, close enough.

As part of my usual display setups I included a morse code CW Code Practice Oscillator for the visitors to try out their “fist” on the Navy Flameproof key as above. Always popular with the kids – I show them the “code” sheet, demonstrate Dots ‘n Dashes and then ask them to send their first names. From across the room I tell them what it is – WOW! This really works! The kids pick up the concept very quickly. Digital Communications!

To add some realism to the display I had a URM-25 signal generator hidden under the table. It was being externally modulated by a CD player running continuous 25 WPM 5 letter morse cypher groups in a loop. With the SCR-284 tuned to the URM-25 frequency, turning the GN-45 generator cranks produces loud MCW sound coming from the speaker.

“WOW This stuff really works!” Yes, it does. Then and now….

Although I believe the Code Talkers had no need to use CW, having this live feedback for the radio “cranker” makes this display “come alive” for the visitors. “Let me try it!”….It’s also a good conversation topic on 75+ year old equipment that still works well. How about your cell phone working in 75 years? 75 months? Um…probably not.

I also included an AN/GRA-6 Radio Wire Integration setup connected to the RT-68. This to illustrate the genesis of today’s “Cell Phone System” to entertain the visitors with a mobile PRC-6 walkie talkie-to-telephone interface. This is how your Cell Phone system works…”Wow!”

As part of the overall event at the Veterans Memorial Building (Danville CA) we also displayed other Militaria, including military vehicles, a 75 mm Pack Howitzer and a UH-1H Huey helo parked on a trailer out front.

The helo is great “Eye Candy” and everyone enjoys climbing aboard for a quick mission.

The Crusader cockpit is also a big hit for the visitors to sit in for a Photo Op and then a quick Combat Air Patrol mission above the neighborhood.

We have been doing these displays since the VMB was remodeled in 2012 after its original construction in 1925. It is a great place for our 9 Veterans Service Organizations to meet and call “Home”.

Here’s some photos from our 2016 display and the Korean War “Tactical Operation Center” I put together as another display example: https://www.n6cc.com/veterans-day-displays/