Below: Type 13 and 22 Air Search Radars aboard the Imperial Japanese Navy destroyer HARUTSUKI. They were also installed on some IJN submarines after mid-1944. One of many typical APR-1 targets in the PTO. The Quarry:

In the photo, the Type 13 “13-GO” Air Search radar is in the upper position.  It consists of a rotatable mast carrying several Yagi antenna arrays operating in-phase to both transmit and then receive the reflected pulses.  The Type 13 operated on the 2 meter band, in the vicinity of 150 mc.

The lower Type 22 “22-GO” system consists of 2 independent “horn” type antennas, one for transmit, the other for receive.  This rotatable system operated in the 10 cm band, in the vicinity of 3000 mc.

The Type 13 and Type 22 radars could be detected by the APR-1 system using the TN-2 and TN-3 tuning units respectively.

On the night of 9 February 1945 “the faithful APR” receiver aboard the USS Batfish, SS-310 detected the 158 mc Type 13 radar emissions of the IJN submarine RO-115. Then in conjunction with its own SJ Radar, the Batfish subsequently torpedoed and sank the RO-115. (Reference 84) *

The AN/APR-1 had its origins in the MIT Radiation Laboratory as the staff worked in a combined effort with the British to turn physics and engineering into electronics tools to help defeat the Axis powers. They worked with General Radio to adapt its R-540 Signal Strength instrument into what became the APR-1. (Reference 86)

Below is the AN/APR-1 (AN/SPR-1) installation aboard the USS Pampanito SS-383.

The APR-1 was first fielded in 1942, and known to be used aboard US Navy submarines seeking out enemy radar emissions in the Pacific. In shipboard service it was designated the AN/SPR-1.

With nearly identical functioning, the APR-4 came somewhat later, an adaptation built by Crosley and used by the Army Air Forces. Those flew on B-17, B-24 and B-29 aircraft in the European and Pacific theaters. Later on, if flew in EB-66, RC-121C, PBM-5S and P-2 Neptunes, serving well into the 1950-60’s.

These search receivers were designed and built (quickly) to cover known German and Japanese air defense, fighter control and shipboard radar systems. They did this along with a Panadapter that allowed the system to search for, detect emissions, determine their frequency, pulse repetition rate and also any antenna rotation rates.

In addition to its well-trained operator wearing headphones, the AN/SPA-1 Pulse Analyzer (see above, lower right unit) connected to the APR-1 Video output characterized the signals. All important data for closing with, or for employing Jammers to combat them.

Below with the TN-17 Tuner from the AN/APR-4 system plugged into my APR-1. The normally used Tuning Unit in this configuration is the TN-2/APR-1 versus what I have here; they are compatible.

Above – monitoring the local airport Tower VHF frequency of 118.1 mc. This airport also simulcasts their VHF tower comms on UHF for any military aircraft so I can copy that on 239.25 mc as well.

The APR-1 is very similar to the more widely known APR-4 which had selectable IF bandwidth and an IF Gain step attenuator versus the variable gain control of the APR-1. The 2 sets are functionally equivalent although the internal layout of the two main chassis are quite different. With appropriate tuning units they covered from 38 to 3200 mc.

An unusual feature is that the internal power supply operates from either 80 or 115 VAC, from 60 to 2600 cps. Odd for an aircraft set but appropriate for shipboard installations. Absent the correct connector, I built this “Suicide Cord” from some molex females and heat-shrink tubing for testing the set for now. The scan motor is 28 VDC.

The TN-17 Tuner covers 74-320 mc and includes 2 type 955 acorn tubes for a mixer and local oscillator function. Although it does not have an RF amplifier stage it receives VHF AM transmissions from aircraft and works quite well with a good antenna. It will also slope-detect narrow band FM voice signals but with its shallow IF amplifier filter skirts the recovered audio level is low. Not an issue for its intended purpose.

With its intended TN-2 tuner, specified sensitivity is between 200 and 700 microvolts. That produces a midscale reading on the meter. Pretty “deaf” by today’s standards but plenty adequate for hearing multi-kilowatt radar signals, (the IJN Type 13 had 10 kw pulse power) especially when they are aimed at you from a high-gain antenna over a line-of-sight path. Hence the IF Gain attenuator. Best sensitivity with the TN-2 tuner is in the range of 140-200 mc.

For general monitoring use it helps to have an elevated antenna with a preamplifier at the antenna.  I am currently using a DIY ground plane antenna cut for 118 mc, mounted 30′ up in a tree. Some details on that antenna system here:  http://www.n6cc.com/tactical-antenna-systems

Shipboard antennas included a “Stub” type monopole and a dipole for the TN-2 coverage of 40-320 mc; “Cone” types for the higher frequencies. The systems included a coaxial switch for selecting appropriate antennas, wave traps and filters for the target frequency band selected. Aircraft and shipboard antennas were different. I would assume sea water pressure-rated antennas and feed lines were unique to submarine installations. 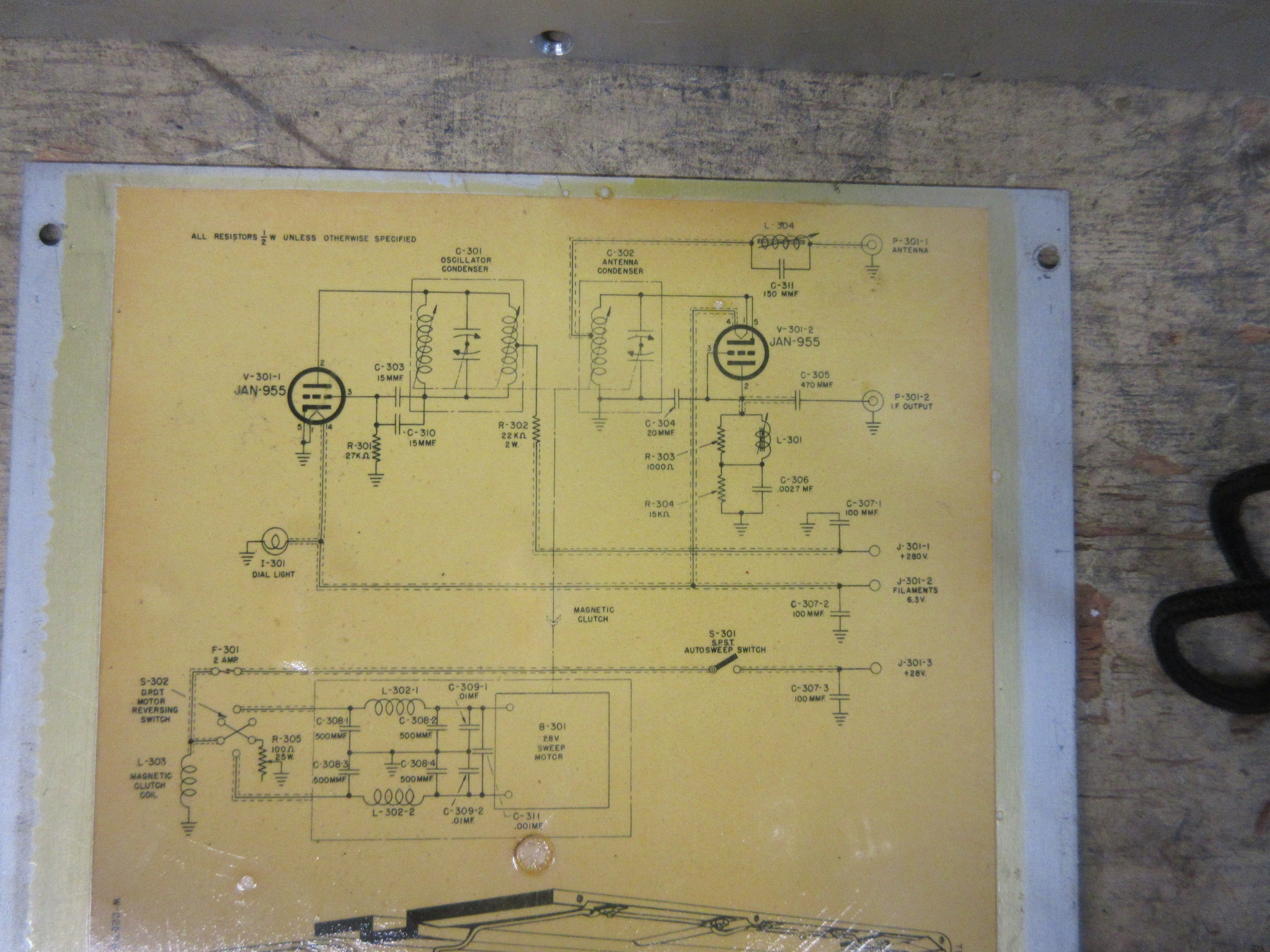 Below: The 78 year-old TN-17 is a Thing of Beauty. The TU and the receiver fired right up – no failed parts. This TU was Moisture Fungus Proofed (MFP) in June 1945 (a month after VE Day) as we prepared for the invasion of Japan. Fortunately, that didn’t have to happen. After WWII the APR-1 reportedly flew on TBM-3S ASW aircraft for awhile.

The 955 local oscillator is on the left, it is proximity coupled to the mixer circuitry inside the stout casting. The mixer on the right is a 955 with its grid and plate tied together, thus forming a non-linear diode. The IF frequency is 30 mc; the LO being 30 mc above the received signal frequency with this tuner. The specified IF bandwith is 2 mc. The LO and mixer tuning capacitors are tied together through a gear/cam follower system.

Below: Imagine the engineering that went into just the shape of that roller cam follower. Fine tuning the LO frequency to the antenna circuit involved a set of 9 screws accessible from the front panel. These made fine adjustments to the LO tuning capacitor rotational position cam.

“Real radios have Motors – and Springs!”

The APR-1’s were made by Galvin (which became Motorola). They were very capable superhet receivers for radio and radar signals. The TN-17 has a motorized frequency tuning mechanism with selectable “start and stop” scan settings. Which I am sure the “Spook” operators appreciated! It works great and is fun to watch.

The main chassis is in good condition however the “HET” (HETerodyne – BFO) function is non operative right now. This set includes all the original allen wrenches, special tuning tools and some spare fuses. Note the tube clamps.

With their associated Tuning Units, the APR-1 and APR-4 sets could effectively detect nearly every radar in the Japanese and German inventory during WWII. In addition to the IJN sets the APR-1/4 was effective against the wide variety of German sets including the Würzburg, Freya, Drehfreya, Freiburg and many others including their airborne sets.

The low frequency TN-1’s could also detect some of the low band VHF AM Voice communications used by German armored forces. The receivers were used effectively in directing the jamming of those tactical circuits as well. Very versatile equipment that was widely used.

As another example, the APR-1 / SPA-1 were also employed by the Australian Army on the ground. From 1943 to 1945 a small unit of Australian soldiers of Field Unit 12, Section 22, General Headquarters, Southwest Pacific Area established a tactical, ground based ELINT unit. They deployed to and moved around in this region via PBY aircraft, landing craft and PT boats while operating similarly to the Australian Coastwatchers. (Reference 58)

Deployed to the New Guinea, Mindoro and Luzon Op Areas they were equipped with APR-1 equipment to detect, localize and characterize Japanese land based but also shipboard radars. As a commando unit they also worked to recover abandoned Japanese radar, radio equipment and documentation as enemy forces were subsequently driven out of the area.

While deployed to Marinduque Island off Luzon they detected and identified 5 Japanese ground-based radar stations and numerous radio stations operating in the area.

While operating from Ilin Island off Mindoro in December 1944 they detected enemy warships approaching San Jose. The unit detected the ships in time to provide two hours warning before the town of San Jose was subjected to a 90-minute bombardment.
———————
I am currently researching the design of the overall APR-1 main chassis which included the power supply, IF amplifiers and signal processing circuits. This article is a work in progress.

* “The Batfish Scores” reenacts the 6th war patrol of the USS Batfish in the sinking of the RO-115 and 2 other IJN submarines over a 76 hour period. No mention of the APR-1 (or its role) but the subs radar was highlighted. The 1957 TV series Silent Service, Season 1 Episode 7.

The Batfish survived the war and is now a war memorial on display in Muskogee, Oklahoma overlooking the Arkansas river.